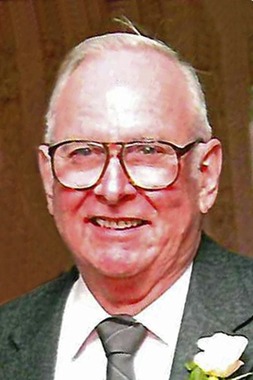 Back to Allen's story

Allen H. Bliefnick, 85, formerly of Fond du Lac, resident of Montello, passed away on Friday, April 28, 2017 at Brookdale Senior Living. Allen was born in Princeton, WI, on March 14, 1932, a son of Elmer C. and Viola H. (Klawitter) Bliefnick. On October 3, 1954 he married Dorothy P. Lee at Zion Lutheran Church, Fairwater, WI.
Allen was a 1950 graduate of Montello High School. On January 1, 1951 he joined the United States Navy and served during the Korean War. Upon his return from military service, he became an electrician was employed at Galloway West for 38 years until his retirement.
During his retirement he built his home near Lake Puckaway. He enjoyed hunting with his dogs Herman and Snoopy, fishing, wildlife, cutting wood to heat the home and as an active member at Trinity Lutheran Church, Mecan, he did so much for the congregation. He also enjoyed tinkering in his workshop and driving the tractor he restored. He loved spending time with all his family.
Allen is survived by Dorothy, his wife for 62 years; three children, Iris (Dennis) Halbach, Bruce (Linda) Bliefnick and Nancy (Jeffrey) Bilitz, all of Fond du Lac; seven grandchildren, Timothy (Julie) Halbach, Pamela (Peter) Duffek, Thomas (Jolene) Halbach, Alana (Jack) Copet, Brian Bliefnick, Brett Bilitz, and Eric Bilitz; eight great grandchildren.
He is also survived by two sisters, Betty Kozlowski and Carol (Gary) Eisenacher; one brother Roger (Marcia) Bliefnick; brothers-in-law, Donald (Darlene) Lee and Dennis Lee; nieces, nephews, other relatives and friends.
Preceding Allen in death are his parents; step-father Clarence Hoth; parents-in-law Russell and Verna Lee; sister, Jane Arbeiter.
Visitation: The family will receive relatives and friends from 9:00 until 10:45 AM on Tuesday, May 2, 2017 at Hope Lutheran Church, 260 Vincent Street, Fond du Lac.
Service: At 11:00 AM, a funeral service will be celebrated at Hope Lutheran Church. Burial at Ledgeview Memorial Park will follow.
Memorials are preferred and may be directed to Allen's family.
Condolences may be offered at www.zacherlfuneralhome.com
Published on May 4, 2017
To plant a tree in memory of Allen H Bliefnick, please visit Tribute Store.

Plant a tree in memory
of Allen

A place to share condolences and memories.
The guestbook expires on August 02, 2017.