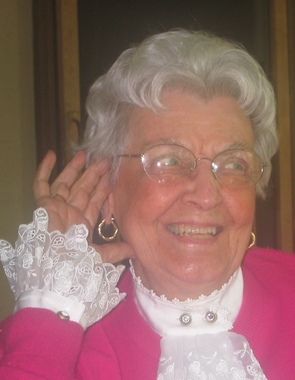 Back to Mildred's story

Mildred "Pedie" Hampton DeJarnette, 98, passed away Friday, June 8, 2018, at her residence following a brief illness. She was a native of Bramwell, W.Va., but had been living in Andrews, North Carolina, for the past 20 years to be near her daughter, Elizabeth DeJarnette Hay, and husband Thomas Robert Hay of Andrews.
She was born 5 January 1920 and was the daughter of the late Leslie Hampton and Cornelia Belle Keller Burke. She was preceded in death by her husband, Elliotte Hampton DeJarnette. She also was preceded in death by her brother, John Thomas Burke, and her sisters, Margaret Stannard, Janet Jurasic, Dorothy Wilson, Nancy Lucas, and Eleanor Litton.
She is survived by her daughter Elizabeth Hay and husband Robert of Andrews and her son Hampton Magruder DeJarnette and his wife, Leslie, of Silver Spring, Md. She is also survived by three grand-children, Heather Hay Eaton of Charlotte, North Carolina, Holly DeJarnette Hay of Atlanta, Ga., and Thomas Robert Hay III of Wilmington, North Carolina. She is survived by four great grand-children, Morgan Victoria Young, Neil Alexander Young, Charles Frederick Eaton III and Daniel DeJarnette Eaton.
The late Mrs. DeJarnette attended Queens University in Charlotte. She later earned certification as a laboratory technician and licensure as a practical nurse. She lived with her husband and two young children first in Pearisburg, Virginia, and then in Ocotlan, Jalisco, Mexico, where her husband was an engineer for Celanese (now Hoechst.) After three years in Mexico, Mrs. DeJarnette's family lived in Princeton, W. Va.
After she returned to West Virginia, she worked as a practical nurse and laboratory technician for private physicians in Princeton. She later earned a real estate license.
She was a member of the Daughters of the American Revolution and the National Society Colonial Dames XVII Century. Also the Delphinium Club in Princeton. She was a Master Gardener with the Murphy Chapter in North Carolina. She was an active member of the Melrose Presbyterian Church when living in West Virginia and of the Andrews United Methodist Church in North Carolina.
A memorial service will be held in August with the Rev. Mary Brown of Andrews United Methodist Church officiating.
In lieu of flowers, the family requests that memorials be made in memory of "Pedie" DeJarnette to the Andrews United Methodist Church, P.O. Box 1310, Andrews, N.C., 28901.
Ivie Funeral Home, Murphy, is in charge of arrangements. An online guest register is available at www.iviefuneralhomeinc.com.
Published on June 22, 2018
To plant a tree in memory of Mildred Hampton DeJarnette, please visit Tribute Store.

Plant a tree in memory
of Mildred

A place to share condolences and memories.
The guestbook expires on September 16, 2019.